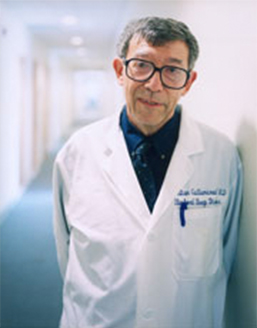 Dr. Christian Guilleminault is a physician and researcher in the field of sleep medicine who played a central role in the early discovery of obstructive sleep apnea and has made seminal discoveries in many other areas of sleep medicine.

Dr. Christian Guilleminault is a physician and researcher in the field of sleep medicine who played a central role in the early discovery of obstructive sleep apnea and has made seminal discoveries in many other areas of sleep medicine. While working at the Stanford University Sleep Disorders Clinic in 1972, Guilleminault became keenly interested in reports published by Italian sleep researcher Elio Lugaresi who had reported that nocturnal hypertension was present in patients who snored. Guilleminault persuaded cardiologists John Shroeder and Ara Tilkian to spend nights in the hospital’s clinical research center monitoring the systemic and pulmonary arterial blood pressure in sleeping patients. The team observed that when patients fell asleep and began snoring, prolonged pauses in their breathing (apneas) were noted that corresponded with dramatic elevations in their resting blood pressure, simulating strenuous exercise as if the patient were lifting weights.Guilleminault then went on to publish several articles illustrating dramatic improvements and reversal of sleep apnea following tracheostomies.Tracheostomy proved curative in these patients, and demonstrated reversal of cardiac arrhythmias and blood pressure abnormalities during sleep; temporarily capping these artificial airways would re-capitulate the changes of sleep apnea, further establishing the causative relationship between sleep apnea and cardiovascular abnormalities.

Guilleminault then went on to describe obstructive sleep apnea in non-obese patients, being the first to coin the term “obstructive sleep apnea syndrome” (OSAS), a term commonly used nowadays. In addition, he described the presence of OSAS in children, demonstrating its association with learning and attention problems along with cardiovascular derangements. Following this work, he went on to describe the presence of elevated upper airway resistance in children in 1982, emphasizing the symptoms of attention deficit, hyperactivity, and abnormal behavior during wakefulness and sleep, learning disabilities and sleepwalking, sleep terrors and enuresis that accompanied this form of sleep-related breathing disorder; he described the same syndrome in adults and penned the term “upper airway resistance syndrome” (UARS) in adults. Finally, working in collaboration with Dr. William C. Dement, Guilleminault established the Apnea–hypopnea index (AHI), which is still in use today to characterize the presence and severity of sleep apnea.

Guilleminault continues to be a prolific researcher in the field of sleep medicine and has authored over six hundred articles in peer-reviewed medical journals to date and has won several awards for his research in the field of sleep medicine. He was a founding member of the Association of Sleep Disorders Centers in 1975 and was elected to be the first editor of the journal Sleep in June 1976, a role in which he continued to serve until 1997. He continues to practice clinical medicine and contribute to research endeavors at the Stanford Center for Sleep Sciences and Medicine.